Games on Morel’s Hill and Kievy Gorki. On the Social Formattings of the Individual in the Work of KwieKulik and the Collective Actions Group

The present essay addresses the relationship between the collective and the individual in artistic performances in Poland and the Soviet Union in the 1970s and 1980s. This relation is crucial for the analysis of Socialist societies. The comparative analysis describes similarities and differences between these two cultural contexts. The two artistic actions described in the essay – the 1971 Gra na Wzgórzu Morela / Game on Morel’s Hill initiated by Przemysław Kwiek at Elbląg (Poland) and the 1981 Desiat’ poiavlenii / Ten Appearances by the Collective Actions group in the region surrounding Moscow (USSR) – both feature a number of formal similarities: aesthetic manifestations of the historical avant-garde such as Suprematism are evoked on the outskirts of cities in snow-covered landscapes and on the fields. But the two actions also deal with the significance and effect of the society and the collective on the individual. Both conduct a kind of societal analysis, which they employ to formulate alternatives to the then existing socialist society. While in KwieKulik’s case the weakening of the moment of subjectivity and artistic individuality has somewhat positive connotations, namely to serve the creation of an open form that is ultimately intended to promote the idea of a non-authoritarian society of free autonomously acting individuals. Consequently it represents an alternative to the existing order. The Collective Actions group deal with the theme collective versus individual differently. The subjugation of the individual under a more expansive collective has a negative connotation, namely the mundane feeling of reality. Even before possible alternatives could be considered, the (by all means self-critical) question posed by the Collective Actions group was always: how does the individual deal with the pressure that the collective (society, ideology) exerts on him? How does he/she react to this collectivity and what tactics enable him/her to adapt within the framework of collectivity? 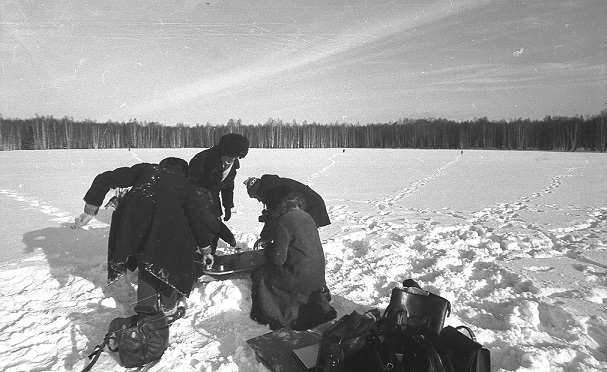