Kinemology, or A Science of Movement: A Forgotten Project of the GAKhN

Vasilii Kandinskii’s plan for the Institute of Artistic Culture, which laid the foundation for the Russian Academy of Artistic Science (RAKhN, after 1926 – State Academy, or GAKhN), emphasised studies of movement and dance. When Kandinskii emigrated at the end of 1921, he left behind in Moscow like-minded colleagues ready to implement his programme, focused on a scientific examination of movement and dance. The next spring, the Choreological Laboratory was founded. Its principal initiator was the art scholar Aleksei Sidorov. Its head was the dancer Natal’ia Tian and its most productive researcher was the mathematician, philologist, and photographer Aleksandr Larionov. After the initial (and not very fruitful) attempt to launch the Choreological Laboratory, Sidorov and Larionov proposed an alternative project, a focused scholarship regarding movement in general as well as  in its many varieties, including movement in dance and cinema, which they termed “kinemology”. They planned to expand the lab by turning it into a “Section”, on a par with the well-established divisions in the Academy, such as the Literary Section, the Music Section, and the Theatre Section. The Section of Kinemology was to be divided into three parts: choreology, cinematography, and rhythm-and-plasticity (ritmoplastika). Various types of movement were to be examined: dance, gymnastics and sport, work operations and everyday movement, and representations of movement in art, film, and photography. However, the project was not fully realised. The term “kinemology” failed to gain popularity, and shortly thereafter a parallel term, “the art of movement”, which was common in the early years of the Academy, also fell out of use. Nevertheless, the study of the art of expressive movement continued in avant-garde dance, photography, and cinema. 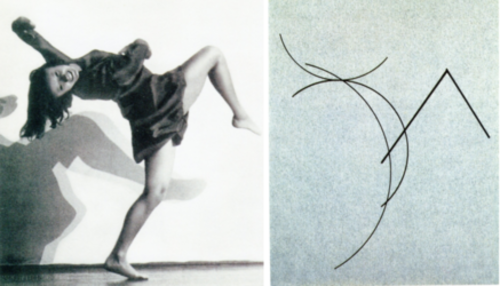