Rallies in Absentia in Quarantined Russia

Re-enacting the Space of Appearance in Augmented Reality

This paper presents a case study of rallies in absentia which took place in Russia during the quarantine of 2020 on the platform Yandex.Navigator. Created by tech giant Yandex and similar to Google Maps, it allows users to check in at a particular geographic location and post comments, as if one were physically present. On April 20, 2020, multiple users in major Russian cities simultaneously checked in at symbolically significant urban sites like Red Square in Moscow and demanded the declaration of a national state of emergency and the compensation of financial losses. Due to the functionality of the digital tool that was used to create the augmented reality of a video game, participants re-enacted the “space of appearance” (the term by Hannah Arendt) where bodies in their plurality put forward claims to those in power by performing their message. This interpretation draws on the concepts of public space, performativity, and virtual/augmented reality to suggest that it is productive to think of this rally in terms of the heuristic potential of the case. The rally can be seen as a generic case of virtual gatherings that might be sustained with the help of digital technologies creatively repurposed for political uses in an increasingly digitised world. 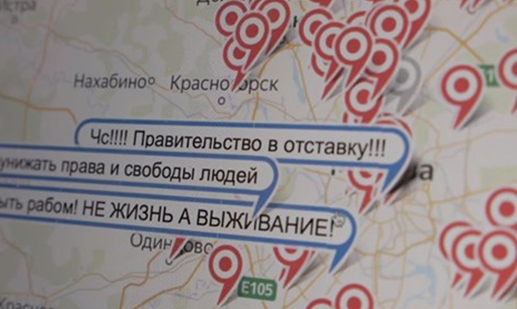